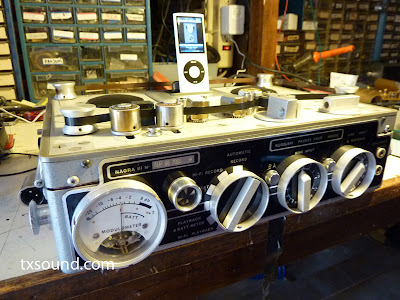 In the spirit of the holidays, thought I would send along a couple of pics of the Ipod Nagra. It's a work in progress. Was hoping to sell it for holidays this year, but I keep adding things. It actually sounds pretty good, those are Tivoli Audio speakers in the deck, sealed speaker enclosures and a class T amplifier inside. The mic input works, tone generator, tape transport, playback head, and has bass, treble controls, RCA stereo ins and outs. Runs on D cells or external power supply.  All the selector positions have a specific function. Pilot flag indicates that ipod is charging.  Last hurdle is to create some record capability with the tape loop, to create a short message or slapback echo gag. I've got to find or create a small enough record amplifier with bias generator. Any ideas? It will play the loop now. But if it can't record, its not a Nagra. 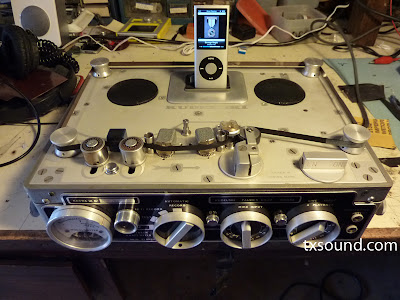 txsound.com
Posted by Unknown at 5:23 PM No comments: